Find this article at:
go.ncsu.edu/readext?237698
— Written By Diana Rashash 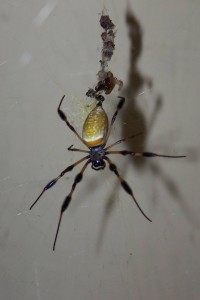 Both spiders – and their webs – can be rather startling when you come upon them suddenly. The female of both types is a large colorful spider that, including legs, can be 5” in diameter. Sometimes, you can see a much smaller, brownish spider on the web with her; that is the male.

The golden silk spider has venom similar to the black widow, but much more dilute. It is a very mild mannered spider that won’t bite unless pinched. People bitten report localized swelling and mild pain.

Both spiders have one generation per year. Around September, the female will form an egg sac roughly 5/8” to 1” in diameter. The male dies fairly soon after mating (and is often eaten); the first hard frost will usually kill the adult female. The young in the sac will overwinter and hatch out the following spring. If you see a sac in an inconvenient location, you can try moving it. The spiders are very good at capturing insects that may be harmful to your trees and plants.

Looking for Our Email Lists?

We have a list of all of our email newsletter offerings.