All County offices will be open to the public starting June 1st. Masks are required in our building for those who aren't vaccinated.

Find this article at:
go.ncsu.edu/readext?609330
— Written By Diana Rashash

There is a new to North Carolina management strategy for alligatorweed control. Alligatorweed (Alternanthera philoxeroides) is an invasive aquatic weed native to Brazil that arrived in the southeastern US in the early 1900s. The plant has opposite leaves, a hollow stem, and a white clover-like flower. It grows very well in our ditches, ponds, and waterways. 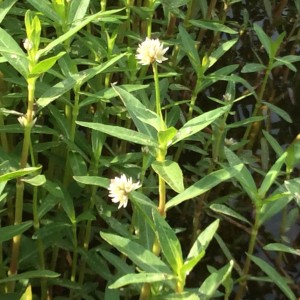 The plant spreads through fragmentation, with each node capable of forming a new plant. So, weed whacking ditches with alligatorweed is NOT recommended! Typical chemical control measures have included the use of glyphosate applied at regular intervals throughout the growing season.

In August 2018, a sample of “sick” alligatorweed from a pond in Onslow County was sent to the NC State University Plant Disease & Insect Clinic (PDIC) and the Army Corps of Engineers lab in Vicksburg, MS. Both laboratories confirmed the presence of alligatorweed thrips (Amynothrips andersoni O’Neill). The adult a. thrips is approximately 2 mm in size, and the larvae are roughly 1.5 mm. 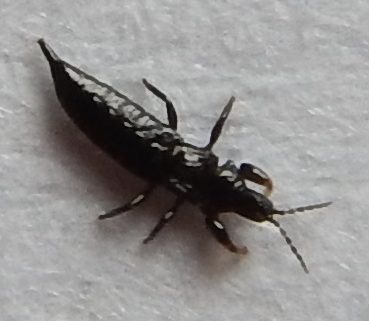 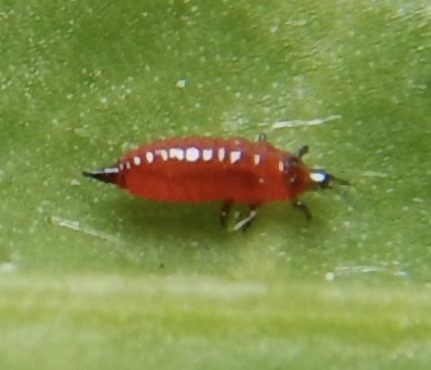 This was the first confirmed sighting of alligatorweed thrips in NC. The a. thrips has a broader cold tolerance than the flea beetle. The a. thrips at the Onslow site easily survived the 10-day freezing spell during Winter 2018. This gives us hope that a. thrips will be a good IPM agent. The a. thrips juveniles and adults only eat alligatorweed, so there is no risk to other plants or crops.

Early damage appears as discolored and curled leaves. A high level of predation can completely defoliate a patch of alligatorweed. These are tiny, yet mighty! 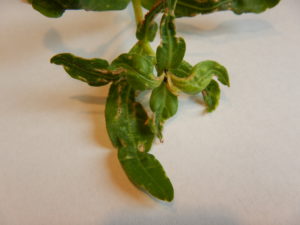 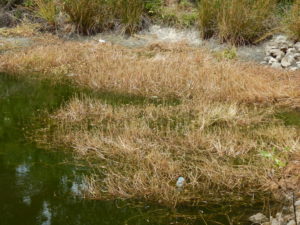 If you see signs of thrips damage to alligatorweed, please contact me at diana_rashash@ncsu.edu. We are trying to determine if there are other locations where these beneficial insects are active.