What’s that thing growing on my azalea? 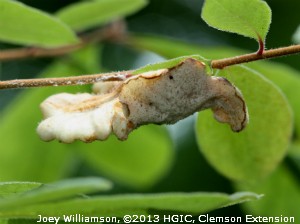 This spring’s cool, wet weather has favored the growth of exobadium leaf galls. Exobasidium is a fungus that is very common in early spring on azaleas (Exobasidium vaccinii) and camellia (Exobasidium camelliae). The fungus infects the new shoots and leaves causing them to become enlarged, thickened, and distorted. The affected tissue turns from light green to nearly white or pink. Later, the galls mature and either rupture to release spores (camellia) or become covered in a powdery white substance before turning brown and hard (azalea).

Exobasidium leaf gall rarely does enough damage to warrant chemical control. Instead, simply remove and destroy any young galls before they mature and release their spores. This will help prevent the disease from spreading next season. Rake up and remove fallen leaves and avoid wetting the leaves when watering plants.