Be on the Lookout For:

Find this article at:
go.ncsu.edu/readext?466170
— Written By Lisa Rayburn and last updated by Kate Holt

Cold Damage to Trees and Shrubs

I am definitely seeing some impacts from the warm weather we had early this winter followed by hard freezing temperatures in February. Damage varies depending on the plant, variety and its particular location. Generally speaking, younger or more newly established plants are more susceptible than older plants. Plants in warmer locations (like those on the south or west side of the house) tend to emerge from dormancy more quickly and are more likely to be damaged that those growing in cooler locations (eastern or northern exposure). Pruning plants in the fall or using too much nitrogen fertilizer can increase the risk of cold damage as well.

In my yard, the fig bushes were hit by the cold, despite my best efforts to cover them. The bushes have varied dramatically in their response to the cold. One plant has no observable damage, it is producing new leaves all along the branches. Another plant has minimal damage – just the very ends of the branches were blackened and the buds were killed but new growth is coming up nicely along the branches. Another plant has died back to the ground but vigorous new growth is coming up from the roots. The final plant has died back to the ground and is not showing new growth yet. However, I will wait until later in the summer before I make a decision to remove the plant. I have seen figs send out new shoots as late as July after winter damage.

Fig bushes set buds twice each season. Flower buds were set last fall on the end of the growth that was produced last season. These flower buds will typically produce fruit that ripens in July and August. If these buds were damaged by the freeze, you probably will not see ripe figs this season. Figs also set fruit buds on the end of the new growth that is produced this spring. However, these “second crop” figs ripen in the fall, October or November time frame. Since the days are getting cooler and shorter, these figs usually will not ripen in our area. Plants that died back to the ground may not produce fruit at all for a season or more. Similar damage may be seen on other plants that flower or fruit on old wood such as some types of hydrangeas.

I have seen some cold damage on other plants. Most plants that just had their newly emerging leaves or flowers damaged will send out new growth and be fine. Plants that had branches blackened and killed or their bark split will have a more difficult time recovering. If you want to help the plant recover, remove any dead wood and wait patiently. Most plants will push out new growth but it may take several months.

Yellow Leaves on Hollies and Other Evergreens 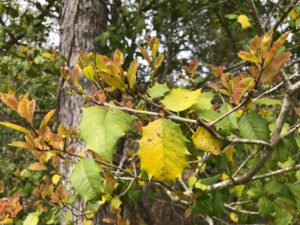 You may be noticing some yellow leaves on hollies and other broadleaf evergreen shrubs. This is not unusual, hollies and other evergreens shed some portion of their leaves each season, usually just before they push out new growth in the spring. As long as the yellowing is limited to the older leaves (further down the branch) and the newer leaves look healthy and green, there is no need to worry. They may shed more dramatically in some seasons than others.

I’m seeing a lot of lawn problems in the Plant Clinic this month and that’s normal for this time of year. The two most common causes of dead spots in the lawn in our area are large patch and ground pearls. In some cases, both problems may be present in the same lawn.

Treatment for large patch should be started in the fall (aim for September 1) using a fungicide such as azoxystrobin. Fungicides are preventive rather than curative, meaning you want to apply them prior to the damage being seen. The product may need to be reapplied, follow the label directions. Fungicide application in the spring is typically not cost-effective as the disease will stop growing naturally as soil temperatures rise.

Ground pearls are a tiny, soil-dwelling insect that feeds on the roots of warm season grasses. Ground pearls have a waxy coating that makes them resemble a small slow release fertilizer pellet. These insects are native to the sandy soils of the coastal plain. Their waxy coating protects them from many pesticides and there are no pesticides that are labeled and recommended for their control.

If the turf is not too badly damaged, optimizing fertilization and watering can help the turf to outcompete the ground pearls. Avoiding the use of root inhibiting herbicides (such as most crabgrass preemergents) will also help reduce stress on the turf. On centipede and St. Augustine, atrazine is a safer preemergent option as it does not inhibit root development in the same way. If the damage is not tolerable, consider converting the area to a non-turf use (flower bed or mulched area) or replacing the existing grass with a more vigorous selection such as ‘Celebration’ bermuda.

Right now, the winter annual weeds such as annual bluegrass and lawn burrweed are at their most mature and most noticeable stage. They are also most resistant to herbicides now while the transitional turfgrass is most susceptible to herbicide damage. Your best option at this point in the season is to keep the weeds closely mown and commit to controlling these weeds next season by applying preemergent herbicides proactively next fall. If you don’t know what weeds you have, bring a sample by the extension office. We’ll identify it and provide a control recommendation for next year.

Looking for our email lists?

We have a list of all of our e-mail newsletter offerings.